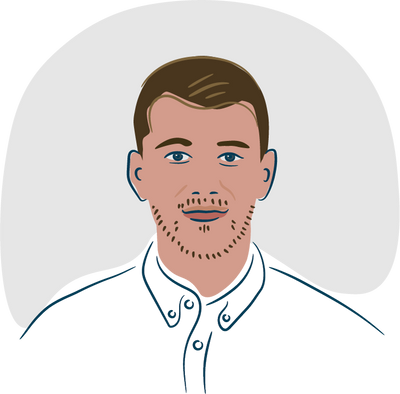 Luke has been an expert in lawn care for over 10 years and in 2020 he turned his passion for gardens into a business.

When worms are active in the superficial layer of the soil, especially in the wetter seasons, you may notice small piles of dirt appear on your lawn, also known as worm casts. In this blog, we explain what worm casts are, their effect on your lawn, and how to deal with them.

What are worm castings?

Worm casts are tiny heaps of soil that appear as a result of worm activity within the surface levels of the soil. They are the nutrient-rich remains of the worm's digestive process, as it feeds on organic matter within the soil. There are over 25 species of worms, but only 3 species in the UK create worm casts.

Although worm casts can be a nuisance, as they affect the aesthetic appearance of your lawn, they are actually extremely beneficial. Worm casts are not only nutrient rich matter, but they are also the result of worm activity within the soil, which improves soil structure, encourages microbial activity and decomposition, breaks down thatch, and provides natural aeration to your lawn.

How to deal with worm castings

In lawns that are kept long, it is fairly easy to brush off dry worm casts and incorporate them back into the grass. Let the casts dry before breaking them up by using a wire rake or stiff brush, and dispersing them across the lawn. This will get rid of the casts and help incorporate the nutrient-rich matter back into your soil.

Dealing with worm casts is harder on fine, short mown lawns. This process can also be tricky when the weather is damp or wet, as the casts do not have a chance to dry.  When the casts are squashed, the muddy smear they leave behind can be quite visible on short lawns, and it creates an ideal bed for weed seeds and mosses to become established.

During autumn and spring, when there is a lot of worm activity, try to keep off the lawn to avoid additional smearing and spreading of the casts. You can also try keeping your lawn longer during these periods of the year to avoid the aesthetic inconvenience of worm castings.

How to prevent worm casts on lawns

There are no pesticides available to kill earthworms, and the benefits that earthworms bring to your lawn and soil far outweigh the inconvenience they may cause. However, products that contain sulphur do act as a deterrent against worms. Generally, worms are found in less acidic soils, so you can consider getting a soil test with the aim of reducing the soil PH. You could also try preventing excessive worm activity by removing rich food sources like fallen leaves and grass cuttings from your lawn.

Worm activity is a sign of a healthy lawn, and if possible to tolerate worm casts, they are highly beneficial. Worms are an important part of your garden’s ecosystem, as they feed on dead plant matter, recycle nutrients, and provide natural soil aeration. To read more about the importance of soil aeration, check out this blog.

Do you have more questions about how to maintain a healthy lawn? Find more tips and solutions on our blog page and Youtube channel.

Luke Taylor, Co-founder of So & Mo

Ready to be proud of your garden?

Transform your lawn in under 3 days with our Performance Liquid Lawn Feed. How to Stripe Your Lawn

Striped and patterned lawns can be truly impressive. With a bit of care and the right lawn mower, they are easier to obtain than you... The perfect lawn requires time, patience, and a great deal of hard work. The grass is greener where it has been mowed, but where to begin? Read more here about how to start